Motion Blur is a very popular technique in fast pace 3D games whose purpose is to add a blurring effect to moving objects. This enhances the sense of realism experienced by the player. Motion Blur can be accomplished in various ways. There is a camera based Motion Blur which focuses on camera movement and there is an object based Motion Blur. In this tutorial we will study one of the options to accomplish the later.

The principle behind Motion Blur is that we can calculate the vector of movement (a.k.a Motion Vector) for each rendered pixel between two frames. By sampling along that vector from the current color buffer and averaging the result we get pixels that represent the movement of the underlying objects. This is really all there is to it. Let's take it to the next level of details. The following is a summary of the required steps and after that we will review the actual code.

This tutorial is based on the Skeletal Animation tutorial (#38). We will review here the changes that add the motion blur to that tutorial.

This is the main render function and it is very simple. We have a render pass for all the objects in the scene and then a post processing pass for the motion blur.

This is our render pass. It is almost identical to the one from the Skeletal Animation tutorial with changes marked in bold face. The intermediate buffer is a simple class that combines the color, depth, and motion vector buffers under a single frame buffer object. We've seen this already when we studied deferred rendering (tutorials 35-37) so I'm not going to review it here. Check the attached sources. The basic idea is to render into a FBO and not directly to the screen. In the motion blur pass we will read from the intermediate buffer.

Other than that you can see that we've added a class member to the 'Tutorial41' class that keeps the vector of bone transformations from the previous frame. We feed it into the skinning technique along with the current bone transformations. We will see how this is used when we review the GLSL code of the technique.

In the motion blur pass we bind the intermediate buffer for reading (which means that the rendering output goes to the screen) and render a full screen quad. Each screen pixel will be processed once and the effect of motion blur will be calculated.

The FS of the skinning technique has been updated to output two vectors into two separate buffers (the color and the motion vector buffers). The color is calculated as usual. To calculate the motion vector we project the clip space positions of the current and previous frame by doing perspective divide on both and substract one from the other.

Note that the motion vector is just a 2D vector. This is because it "lives" only on the screen. The corresponding motion buffer is created with the type GL_RG to match.

This is the VS of the motion blur technique. We simply pass along the position and texture coordinate of each vertex of the full screen quad.

This is where all the motion blur fun takes place. We sample the motion vector of the current pixel and use it to sample four texels from the color buffer. The color of the current pixel is sampled using the original texture coordinates and we give it the highest weight (0.4). We then move the texture coordinate backward along the motion vector and sample three more color texels. We combine them together while giving smaller and smaller weights as we move along.

You can see that I divided the original motion vector by two. You will probably need some fine tuning here as well as with the weights to get the best result for your scene. Have fun.

Here's an example of a possible output: 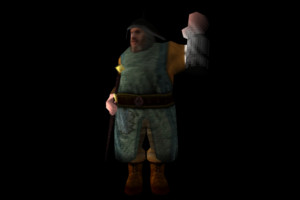